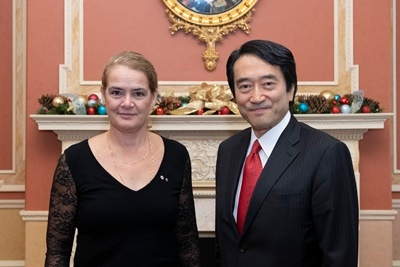 Before coming to Canada, I held the positions of Ambassador as the Deputy Permanent Representative of Japan to the United Nations in New York and Press Secretary of the Minister for Foreign Affairs of Japan as the Director-General for Press and Public Diplomacy.

Since 2018, Japan and Canada have been celebrating the 90th anniversary of diplomatic relations between the two countries. Our two countries have built a longstanding, friendly relationship and share universal values such as freedom, democracy, human rights, and rule of law. During the visit of Mr. ABE Shinzo, Prime Minister of Japan, to Canada in April 2019, the Prime Ministers of Japan and Canada welcomed deepened Japan-Canada relations in both the areas of security and the economy. The leaders also shared the same view on strengthening the strategic partnership between Japan and Canada under the vision of a free and open Indo-Pacific.

In the economic area, the Comprehensive and Progressive Agreement for Trans-Pacific Partnership (CPTPP), to which both Japan and Canada are Parties, entered into force at the end of December 2018. Thanks to the CPTPP, in the first to the third quarters of 2019 alone, for example, there has been an increase of 67.2% in the export of beef and beef products from Canada to Japan compared to the same period of the previous year. Furthermore, Japan and Canada are important partners in the energy area. While Japan puts importance on ensuring a stable supply of energy, Canada seeks to diversify the destination for its energy exports. We, therefore, expect further cooperation between our countries in this area, with a focus on Liquefied Natural Gas (LNG). In the field of innovation, Canada has the human resources and hubs for the world’s most advanced Artificial Intelligence (AI). AI is another promising area where both countries can collaborate, taking advantage of each other’s strengths.

In recent years, the person-to-person and cultural exchanges between our countries have also become more active.

Although I have visited Canada several times over the past three decades, this is my first time working in this country. I am fully committing my strength to further develop positive bilateral relations in all areas. I truly appreciate your support and look forward to working alongside all of you in these endeavors.

About the Ambassador (Curriculum Vitae)