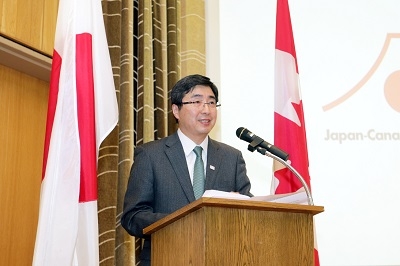 It is my pleasure to introduce myself as the new Ambassador of Japan to Canada. I presented my credentials to Her Excellency the Right Honourable Julie Payette, Governor General and Commander-in-Chief of Canada, on November 20 and officially began my duties as Ambassador.

Since entering the Ministry of Foreign Affairs of Japan, I have assumed several positions such as Deputy Vice-Minister for Foreign Policy, Director-General of Asian and Oceanian Affairs Bureau, Director-General of International Cooperation Bureau, and Executive Assistant to the Prime Minister in Japan, as well as foreign postings as Ambassador of Japan to the Association of Southeast Asian Nations (ASEAN) and Minister at the Embassy of Japan in the United States.

Japan and Canada have enjoyed nearly 90 years of friendship to date, sharing universal values such as freedom, democracy, human rights and rule of law. In May 2016, the Prime Ministers of Japan and Canada launched a ‘New Era for Cooperation between Japan and Canada’, reaffirming their commitment to foster bilateral relations in various fields, such as security and economy. In recent years, the exchange on grassroots level between the two countries has also been increasing, as evidenced by the fact that the number of mutual visitors to Japan and Canada is on the rise, with Canadian visitors to Japan having reached a record high of approx. 270,000 in 2016.

2018 marks the 90th anniversary of diplomatic relations between the two countries. As well, Canada is the G7 Chair in 2018 and will see increased VIP visits and people-to-people exchanges between Japan and Canada. Seizing these opportunities, I am fully committed to deepening bonds between Japan and Canada. I truly appreciate your support and look forward to working alongside all of you in this regard.

List of Successive Japanese Heads of Mission to Canada