Carillon Performance at the Peace Tower

2018/11/14
On October 26, the Ambassador of Japan, H.E. Kimihiro Ishikane, and Ms. Ishikane attended a carillon performance by Dr. Andrea McCrady and her Japanese student, Minako Uchino, at the Peace Tower on Parliament Hill.

The Peace Tower and its carillon were built after the First World War in remembrance of the sacrifice and service of the Canadians who served during the war. This neo-gothic tower designed by the architect John Andrew Pearson is 91 meters high and houses 53 bells which make up the carillon. Every day, the carrion recital is performed, making the Peace Tower Carillon the most frequently used carillon in Canada.

After learning the history of the Peace Tower Carillon by Dr. Andrea McCrady, His Excellency and Ms. Ishikane attended the performance consisted of five songs. Dr. McCrady began the performance with the Canadian Anthem, O Canada, and followed with two Sonata by Domenico Scarlatti. 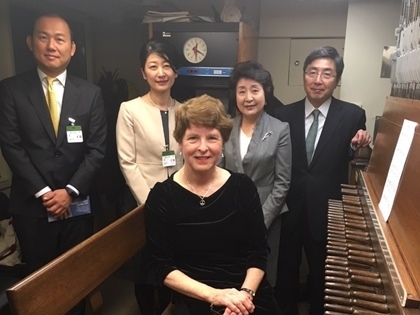