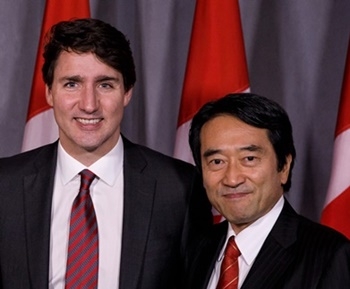 This is my first time starting a New Year in Canada since I assumed my duties as Ambassador in the end of November 2019.

In December, I had opportunities to meet and have meaningful exchanges of views with representatives of Canadian political and business circles, cultural and academic areas, Japanese-Canadians, Japanese companies in Canada, including the presentation of my credentials to Her Excellency the Right Honourable Julie Payette, Governor General and Commander-in-Chief of Canada.

In 2019, there were mutual visits by leaders and high profile figures between Japan and Canada, including the visit by Mr. ABE Shinzo, Prime Minister of Japan to Canada in April, and the visit by Mr. Justin Trudeau, Prime Minister of Canada to Japan to participate in the G20 Osaka Summit in June. This year I would like to steadily deepen the strategic cooperation between the two countries based upon the results of these Japan-Canada summit meetings and G20 Osaka Summit.

Following the 90th anniversary of diplomatic relations between our two countries in 2018, many commemorative events were held in 2019 celebrating this important milestone. As well, in August of 2019, Her Imperial Highness Princess Takamado visited Canada. These events and visit served to further deepen mutual understanding between the peoples of our countries.

Last but not the least, I wish you the very best for a prosperous and happy New Year.