Passing the Torch: Japan and Canada's Friendship through Sport 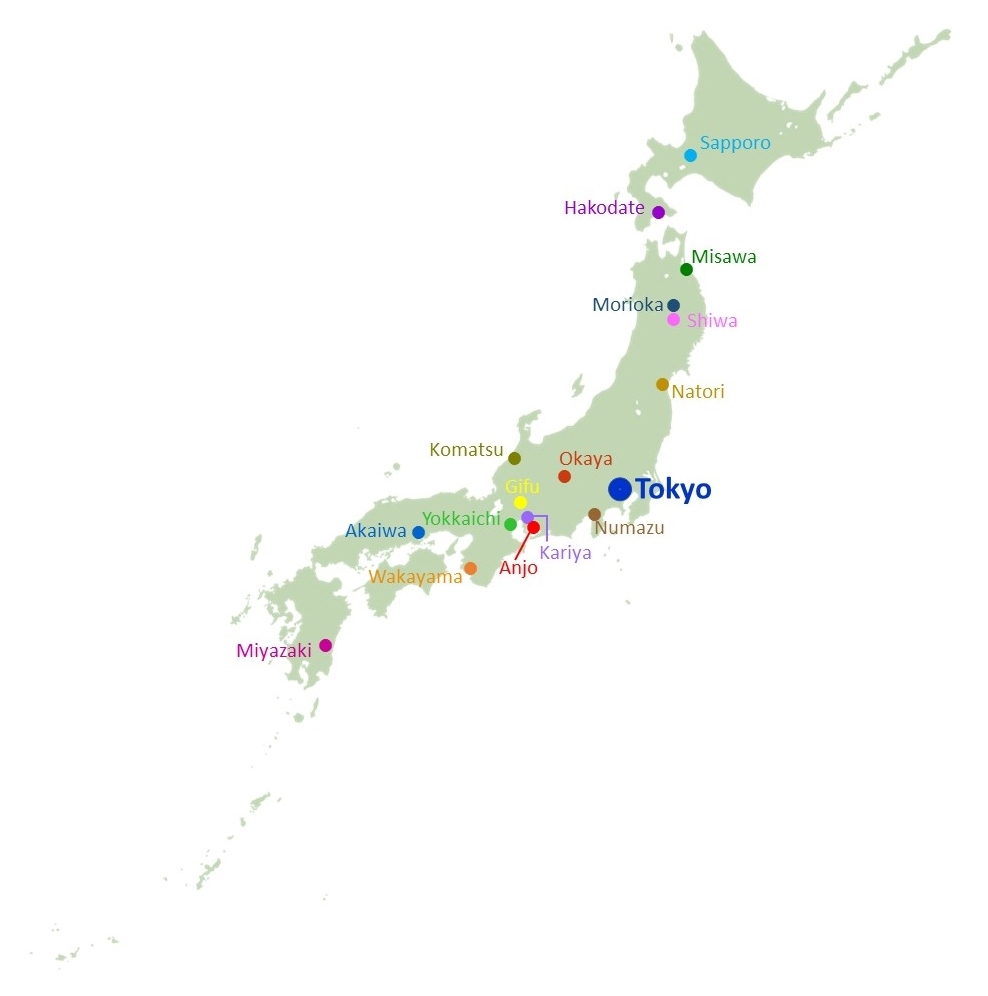 Sapporo City is Japan's northernmost ordinance-designated city with a population of about 1.97 million, accounting for about 30% of the population of Hokkaido. In 1972, Hokkaido hosted the first Winter Olympic Games in Asia. Sapporo City is a sports city that hosts many international sports competitions including the Asian Winter Games, FIFA World Cup, and Rugby World Cup. Some of the local specialties in Sapporo are miso ramen, soup curry, and Japanese style mutton.

-Message to Athletes-
As the host town of Canada, Sapporo City is rooting for Canadian women's goalball team! We look forward to taking this opportunity to connect with the people of Canada in various ways! Please come visit Sapporo City!

Hakodate City is one of the leading tourist destinations in Japan. On the occasion of the event called "Hakodate Christmas Fantasy" which is held in December every year, we light up the fir trees that are sent from our sister city, Halifax, N.S.

-Message to Athletes-
Although it is difficult to travel between Japan and Canada now due to the ongoing COVID-19 pandemic, we are looking forward to being able to freely visit each other's countries again like in the past.

Misawa is a city surrounded by beautiful nature that is aiming to enhance this symbiotic relationship as part of the legacy of the Tokyo 2020 Olympic Games.

-Message to Athletes-
Misawa City considers Wheelchair Rugby Canada to be our friend, and even family. At the Tokyo 2020 Olympic Games, the people of Misawa City are cheering for Team Canada. Let's go Team Canada!

Morioka City, the capital of Iwate Prefecture, is located 2 hours and 10 minutes north of Tokyo by Shinkansen and its population is about 300,000. The Rock Splitting Cherry Tree was designated as a National Treasure. For four days in mid-summer, beginning August 1st, the traditional local dance festival “Sansa Odori” is annually held.

-Message to Athletes-
Morioka believes that great games are ahead for Team Canada at the Olympics.

Shiwa Town is located approximately in the centre of Iwate Prefecture, between Morioka City and Hanamaki City. The town is blessed with nature, with the Kitakami River flowing through the center of the town. It is also surrounded by the Kitakami Highlands to the east and the Ōu Mountain Range to the west.
The town is also situated in an excellent location convenient for transportation. National Route 4 as well as six different highways and railroads run north and south through the town. The town also has interchanges and three train stations.
The town's core industry is agriculture. In addition to glutinous rice, which boasts one of the largest production volumes in Japan, buckwheat, wheat, and various vegetables are also produced. Fruit such as apples and grapes are also cultivated.

-Message to athletes-
Taking the opportunity of the Tokyo 2020 Olympic and Paralympic Games, Shiwa Town has been making valuable connections with Canada, such as with the Canadian Volleyball National Team. We hope to continue to deepen our exchanges with Canada in the future.

Natori City is located in the south-east of Miyagi Prefecture, and is represented by the Raijinyama Kofun, the largest historic site in the Tohoku region. The city is blessed with fertile land as well as good climate and natural features. It is a city with the perfect combination of nature and history. Some of the local specialties are ark shell, whitebait, and Japanese parsley. The Great East Japan Earthquake that struck on March 11th, 2011 devastated the city's coastal area. Thanks to the support received from many people including the Government of Canada, the city has recovered from the disaster. Now that ten years have passed since the Great East Japan Earthquake, we want to continue to convey our sincere gratitude to Canada through our "ARIGATO" Host Town for Supporting Reconstruction Project.

-Message to Athletes-
We look forward to seeing Canadian athletes competing at Tokyo 2020 Olympic Games. Team Natori will be rooting for you!

Komatsu City, in southern Ishikawa prefecture, is blessed by the natural bounty and scenery of both the Sea of Japan and one of Japan’s Three Holy Mountains, Mt. Hakusan. Literally meaning “White Mountain” for its visibly snow-capped peak throughout the year, Hakusan is greatly revered by the locals, and a particularly well-loved viewing spot is across Lake Kiba in Komatsu. As a national canoe mecca, this is also where the Olympic canoe teams will be gathering to train! It is particularly beautiful in spring, when sakura tunnels line the 6.4km trail around the lake.

-Message to Athletes-
Komatsu is a small and quiet city, but we long to share our rich nature and culture and get in touch with people around the world! We hope for such a chance with our friends in Canada someday.

Okaya City is located in the center of Nagano Prefecture, on the shores of Lake Suwa. Surrounded by Yatsugatake, Mt. Fuji, and beautiful mountains, it is a city rich in nature.

-Message to Athletes-
We are looking forward to the best performances of all the athletes at the Tokyo Olympics and Paralympics. Do your best Canada!!!

Numazu City is about 60 minutes from Tokyo, located south of Mt.Fuji. It is the gateway to the Izu Peninsula. There are many beaches on the 63km-long coast, and you can enjoy fresh sea food and restaurants at Numazu Port. Numazu is a scenic spot with a mild climate. It’s rich in nature that changes with each season. It’s a city with many warm-hearted people, and it’s a place where you can feel at peace amongst a friendly atmosphere.

-Message to Athletes-
Numazu City is one of the Host Towns of Canada. The Canadian Fencing Team had a Pre-Games Training Camp for Tokyo 2020 in Numazu. We hope Team Canada have great success in their matches. Good luck!

Kariya City, located in the center of Aichi Prefecture and, has a population of about 150,000. It is a vibrant city with a thriving automobile industry, being situated next to Toyota City, where Toyota Motor Corporation is located. One major draw is its convenient location. For example, it takes only 17 minutes to go to Nagoya and about 2 hours to Tokyo.
Kariya Highway Oasis, which is near Aichi University of Education and is also a parking area on the Ise Bay Expressway, has a large Ferris wheel with a height of about 60 m. There is also a natural hot spring, Kakitsubata no Yu, where you can enjoy footbaths. After Universal Studios Japan, the number of visitors is the third highest in Japan, and many people from all over the country visit. Every autumn, the Kariya Anime Collection, a festival of anime and cosplay, attracts approximately 10,000 people from all over the country. For the past 240 years Kariya City, which prospered as a castle town in the olden days, holds the Mando Matsuri Festival in which the youth of the city carry a doll called Mando, and warlords and Kabuki actors are drawn to prevent fires and other disasters. Why don't you visit Kariya City and experience the history and culture?

-Message to Athletes-
In 2021, Kariya City and Mississauga City will celebrate their 40th anniversary of becoming sister cities. In such a memorable year, Kariya City is looking forward to inviting the Canada Women's Basketball League to hold a pre-camp for the Tokyo 2020 Olympic Games in Wing Arena.

Anjo city is located in the middle of Aichi. About 100 years ago Anjo’s main industry was agriculture. While agriculture is still one of our main industries, the manufacturing industry is also strong now. Most of the manufacturing companies in Anjo supply parts to big auto companies, but there is also small-scale manufacturing. The collaboration between local designers and small manufacturing companies won the Grand Prize and Gold Prize in the “Asia Design Prize”.
Due to our city’s long history of softball, we are trying to become known as “The Place for Softball” (Softball no Seichi). Team Canada Softball Anjo Camp is one of the projects attempting to realize this goal. Team Canada brought us the opportunity to learn about Canada and softball, and also motivated local students to learn English. We hope to continue the relationship with Team Canada to promote a new way of international understanding through sport.

Located in the center of Japan, Yokkaichi City faces the Suzuka Mountains in the west and Ise Bay in the east. Blessed with such rich nature, the city also enjoys a favorable economic location thanks to its connection with the three regional economies of Tokai, Kinki, and Hokuriku. Moreover, Yokkaichi City boasts a wide variety of characteristics fostered through its rich history, culture, and tradition. Of particular note is a petrochemical complex that has been developing environmental technology based on lessons learned from the city’s pollution history. Added to this is one of the largest industrial clusters in Japan featuring some of the world’s most advanced and largest semiconductor plants. This complex and cluster serve as sources of the city’s vitality. Thus, while striving to achieve harmony between industry and the environment, as well as industry and culture, Yokkaichi City will continue to focus on parenting support, education, medical services, and welfare measures so as to ensure continuous development as a city that is livable for everybody. Yokkaichi City seeks your generous understanding and support for its efforts to embody the slogan “Yokkaichi for Everybody to Be Proud of.”

-Message to Athletes-
Yokkaichi City is rooting for Gymnastics Canada! We hope you get wonderful results!

Surrounded by the ocean and mountains, the City of Wakayama is filled with natural beauty and has a mild and warm climate. It is also rich in history. Wakanoura is recognized as Japanese heritage and reminds people of Japan in the old days. Additionally, the Tomogashima Islands, where Katsuragi Shugen (a type of traditional religious training) originates, is also located in the city.
The City of Wakayama and the City of Richmond became sister cities in 1973. Since 2016 Wakayama City has been hosting camps for Swimming Canada as a host town. The interaction between the teams and local elementary school students has also deepened our friendship.

-Message to Athletes-
Unfortunately, we are unable to have the pre-game training camp this year in Wakayama City. However, we hope that you will have the chance to come for training camps and enjoy the beautiful city after the pandemic. We look forward to seeing you in the future.

A beautiful pink carpet of peach flowers is a typical spring scene in Akaiwa. The harvest season starts from late June until August. Akaiwa is also famous for many quality fruits such as grapes, pears and strawberries. Akaiwa welcomes you with beautiful mountain sites, rice fields and amazing stars at night.

-Message to Athletes-
Enjoy your moment and best of luck! If you have our peaches you will be as strong as the legendary MOMOTARO!!!

Miyazaki has many sunny days and a warm climate throughout the year. Due to this blessed climate, we thrive in agriculture. In particular, our Miyazaki Beef is recognized for its quality and was awarded the top prize in Japan.

-Message to Athletes-
As the host town of Canada, Miyazaki will be cheering Canada on. Go for it, Canada!

Miyazaki City is a popular beach resort city with many natural wonders such as the Aoshima and Nichinan coasts. The city enjoys a mild climate year-round.

Miyazaki City is also a sports destination that draws a large number of domestic and international visitors. The city hosts numerous training camps and golf tournaments each year. In the past Miyazaki has hosted many different sports teams, include professional baseball teams from Japan and South Korea, Japan’s soccer J. League and other professional sports clubs.

-Message to Athletes-
Miyazaki city has been promoting the Tokyo 2020 Olympic and Paralympic Games in the capacity as a "host town" of Canadian teams since 2018. We look forward to the success of Team Canada!

Other Host Towns for Canadian Teams

Highlights across Japan and Tokyo