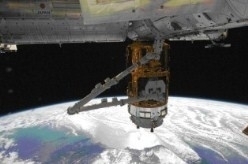 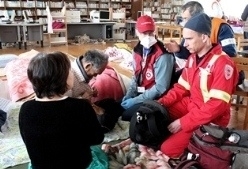 Support from a Canadian NGO after the Great East Japan Earthquake (Copyright: CMAT)

Japan and Canada have enjoyed many years of friendly relations. Our two countries share many fundamental values, including: respect for the rule of law; freedom; parliamentary democracy; respect for human rights; and the promotion of open market economies.

From a geographical perspective, both countries see each other as a strategically important partner. This is particularly true given the increased economic presence of Asia in the world economy, as well as the momentum toward regional economic integration in the Asia-Pacific region. Furthermore, in the context of international security, the focus on Asia has increased in recent years.

High level exchanges are frequent. For example, the Canada-Japan Inter-Parliamentary Friendship Group meets annually. Talks between our two governments are held frequently. During a visit by Canadian Prime Minister Harper to Japan in March 2012, he and Prime Minister Noda agreed to further enhance political dialogue. The two leaders also agreed to extend Japan-Canada security cooperation, in part through the furthering of negotiations toward an Acquisition and Cross-Servicing Agreement (ACSA). As the most mature democracy and the most advanced market economy in Asia, Japan is one of Canada’s most important partners in the region and the two countries often collaborate on global issues such as natural disasters, peace-building, climate change and poverty reduction.

Canada and Japan have enjoyed mutually complementary economic relations. The bilateral relationship between our two countries features significant levels of two-way trade in goods and services, direct and portfolio investment, exchanges of technology and knowledge, and the movement of people.

In 2011, Japan was Canada’s fourth largest export market in goods such as natural resources and agricultural products. Aside from that, Canada also exports its high technology products such as aircraft and flight simulators to Japan.

In the same year, Japan was the fourth largest foreign supplier of goods such as vehicles and industrial products to Canada. At the end of 2010, Japan was Canada’s sixth-largest source of foreign direct investment. Japan’s direct investment, such as that found in the car industry of Ontario, employs more than 64,000 Canadians. These cars are also exported to the U.S.

Our two countries equally maintain competitive leadership in high-tech, IT and other advanced industries, which gives ample opportunities for industry and technology cooperation. An excellent example of this cooperation is the long partnership between Bombardier of Canada and Mitsubishi Heavy Industries (MHI). Beginning in the mid-1990s, MHI provided significant design, manufacture and production support, as symbolized in its supply of carbon fiber made fuselage, to the development of a number of business jets and regional aircraft produced by Bombardier including the Global, Challenger, and CRJ series planes.

These economic ties, which have served as a cornerstone of our bilateral relationship, will be further strengthened by negotiations toward an Economic Partnership Agreement (EPA), which Prime Minister Harper and Noda launched during Mr. Harper’s March visit to Japan in 2012. Japan and Canada also share the view that participation in the Trans-Pacific Partnership (TPP) will further improve economic relations with neighboring Asia-Pacific countries.

In the field of science and technology, our cooperation is well-represented by the docking of Japan’s unmanned transfer vehicle, the Kounotori (HTV) with the International Space Station (ISS) in which the Canadian-developed robotic arm, Canadarm2 played a critical role. The year 2011 marked the 25th anniversary of science and technology cooperation between Japan and Canada. Under this framework, our two countries have launched initiatives in the fields of nanotechnology, stem cell research and sustainable energy technology. Recently, our two countries successfully held two stem cell workshops with distinguished scientists in Toronto in 2011, and in Yokohama in 2012. The first nanotechnology workshop with senior researchers and Government officials was held in Waterloo in 2011, in order to enhance science and technology collaboration between our two countries.

Through an increase in people-to-people exchanges we now have a much deeper mutual understanding of each other. Many Japanese admire Canadian tolerance and multiculturalism, while Canadians appreciate Japanese politeness and solidarity. Many fascinated Canadians take part in traditional Japanese cultural activities such as Ikebana and Tea-Ceremonies, and young Canadians are often attracted to Manga and J-Pop music.

Cultural and educational exchanges are widespread. Since 1988, as part of the Japan Exchange & Teaching (JET) Programme, over 7,800 Canadian young people have lived in Japan while teaching English in schools and promoting grassroots cultural exchange. More than 70 sister-city relationships exist, including the twinning of Alberta and Hokkaido. Youth exchanges also actively take place through the Working Holiday Programme as well as university/student exchange programmes.

In March 2011, a violent earthquake and tsunami devastated much of northeastern Japan. In the aftermath of the tragedy, the Government of Canada immediately dispatched 25,000 thermal blankets to the affected area and provided invaluable tools such as dosimeters and radiation survey meters. Individual Canadians continue to give generously to relief and reconstruction efforts. Contributions through the Canadian Red Cross alone have topped $49 million and contributions made through the Japanese Red Cross and other NGOs have yet to be totaled. In March 2012, on the occasion of his official visit to Japan, Prime Minister Stephen Harper visited the disaster stricken area in Tohoku, and expressed the sympathy of the people of Canada to the victims of the disaster. The tremendous support from the government and the people of Canada further strengthened the bond between our two countries.